People often ask me how I make my paintings, so I thought I would show you. I will use my portrait of Michael Ziegler as an example. I mostly paint people (and animals!) I love, and thought it would be interesting to paint someone I didn’t know personally. Michael Ziegler is the mayor of our town, and I wrote him to ask if I could paint him; he was kind enough to take time out for my project. I contacted him just before the first lockdown, and we met up during the lockdown in the town hall.

I brought my camera and a strobe (and my husband to carry stuff + be charming and fun – I’m very much an introvert!), and took a lot of pictures. As Michael Ziegler is the mayor, I have seen several photos of him, always portraying him as the dynamic mayor he is. I wanted to paint a more relaxed version of him, and was pleased to find him relaxed and chatty during our meet up. I ended up choosing this photo, as I think it captures a more relaxed side of him. 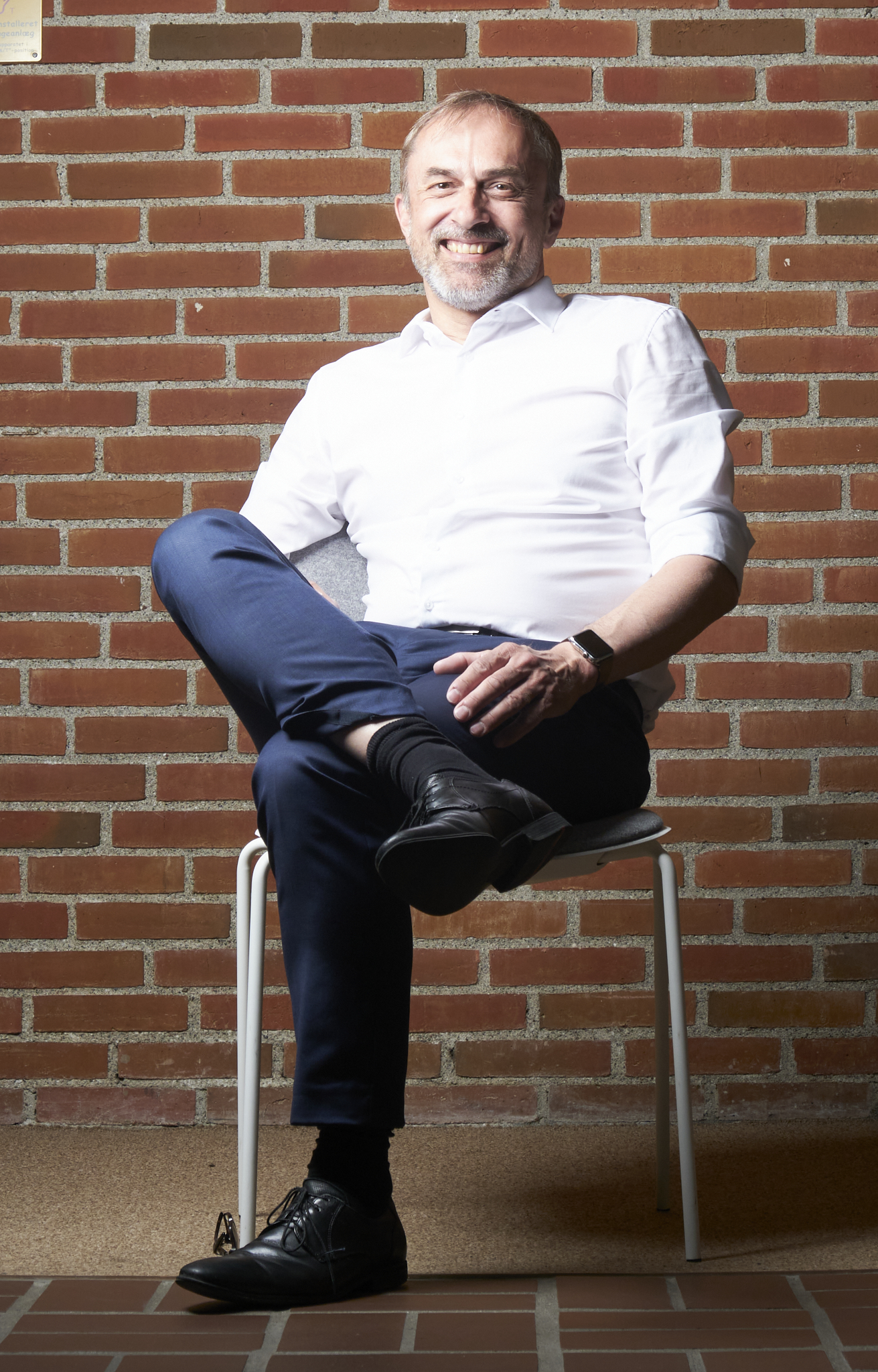 The next few weeks after choosing the photo I spent thinking about how I wanted the painting to look. I wanted to portray him surrounded by his life, and slowly the painting came together. I included all the animals to represent different aspects of his life, and of course had to include his two cats as well. When the painting had come together in my mind, I made a mock up in Photoshop, placing the diffenerent components where I wanted them. 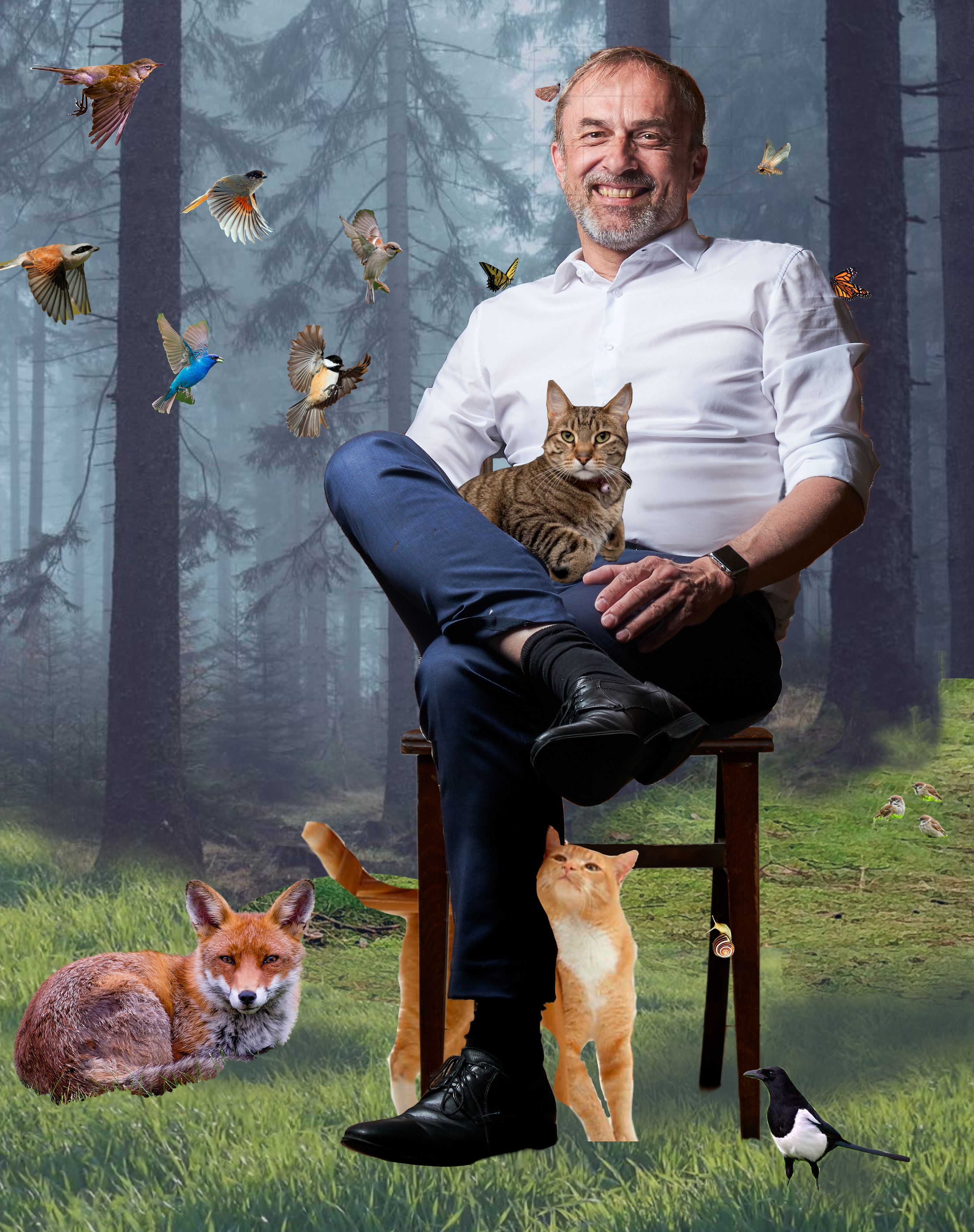 Using the grid method, I then transfered the mock up to my canvas. 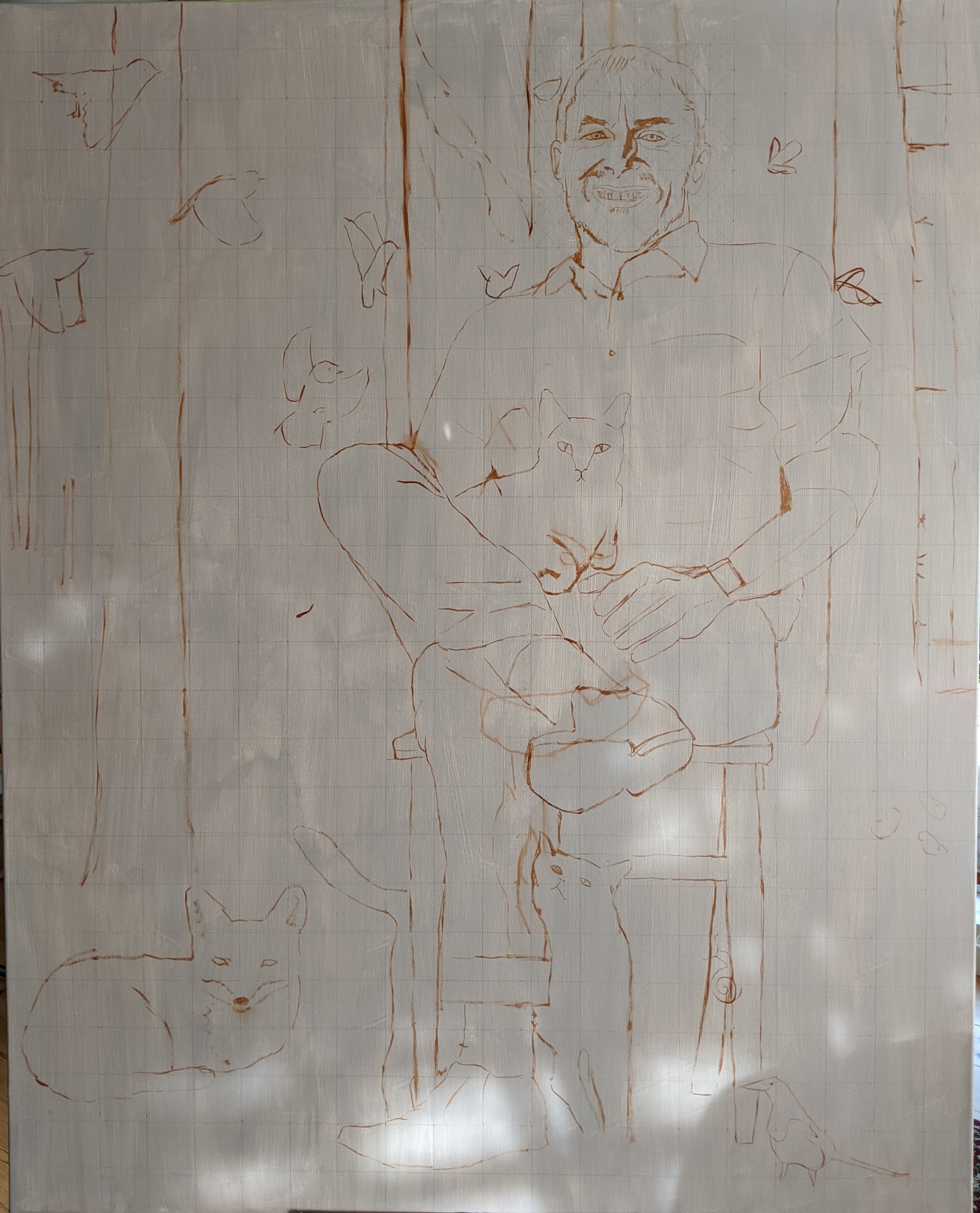 Then I started painting, I start by blocking in the background, and then add details. I usually decide on a colour palette before starting, choosing 5 or 6 colours, and mixing the rest from these. When I first started painting a few years back, I used all the colours, but I like the end result better when only using a few different colours.

I usually paint a few days a week, and around 4 hours at a time. I listen to music and just enjoy getting lost in the painting process. That said, every time I make a painting i do get to a panicked stage where I think “why did I start this? I have NO idea how to make a face look like a real person! Gah I have lost the ability to paint!”. But somehow, until now at least, it comes together in the end every time.

This is how the portrait turned out; It took me around 6 months to finish this: 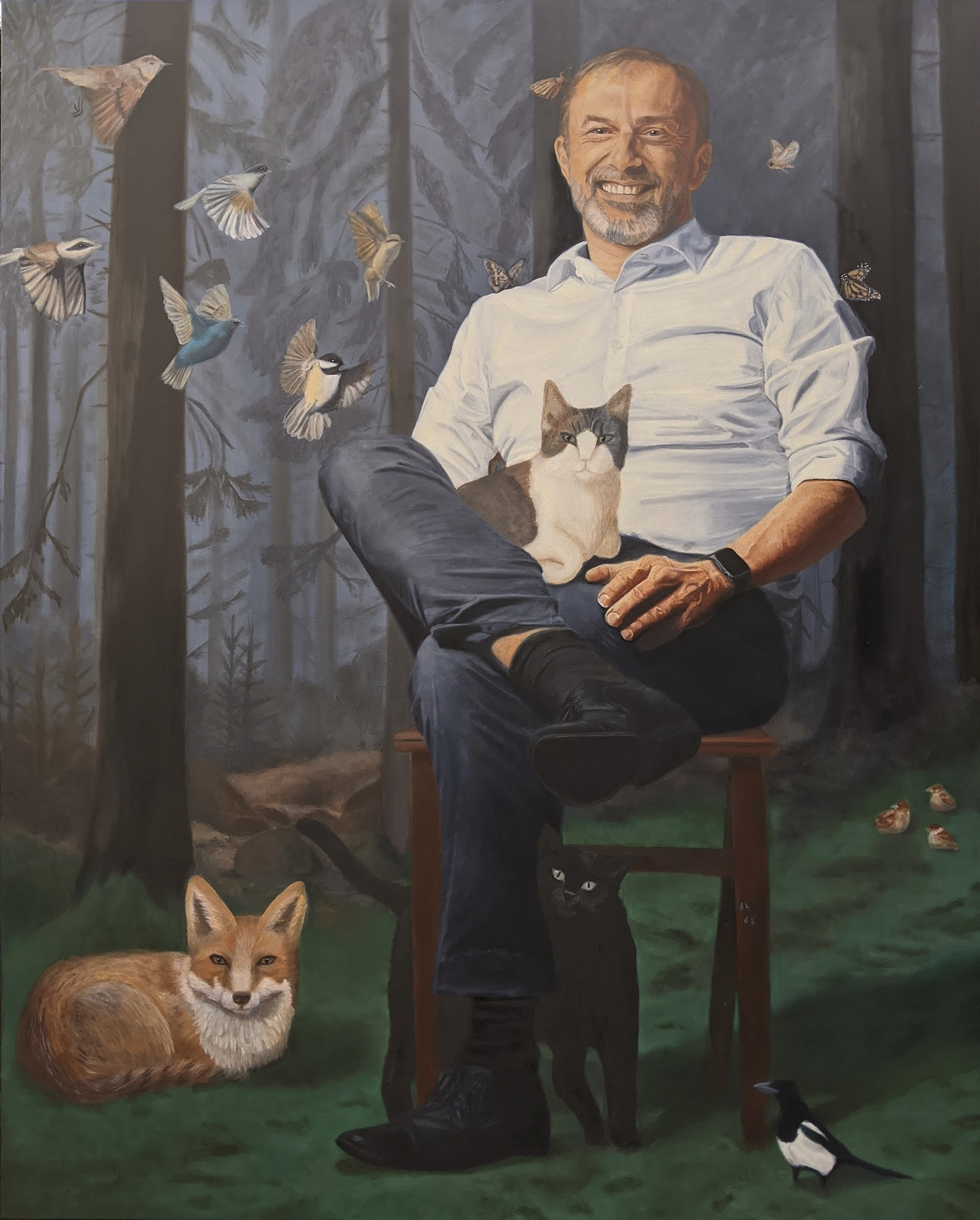 After the lockdown Michael Ziegler came to our house to see the painting, and I think he liked it – I rather like him for taking the time to come see it 🙂 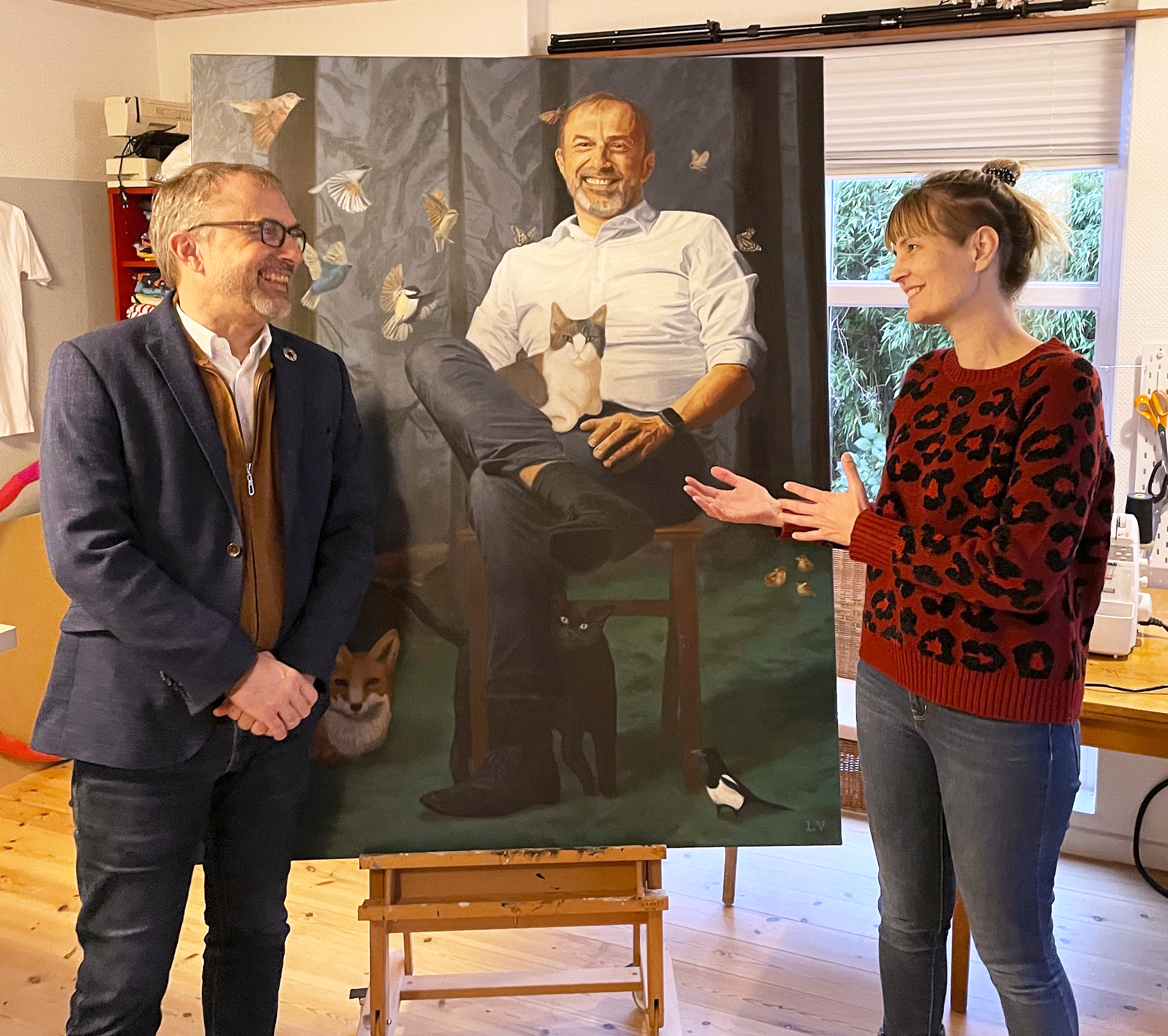